In the course of the work on the project, the optimal technological parameters for the formation of monolayers of phthalocyanines by the Langmuir-Blodgett (LB) method were selected, in which a stable monolayer with reproducible properties is formed. Figure 1 shows the images of the film, before (a) and after (b) the optimization process, obtained using an atomic force microscope.

Figure 1. AFM image of a phthalocyanine film before and after optimization of the technological parameters of the film formation process

The installation for the deposition of monolayers by the LB method was modernized: a new chemically resistant bath, barriers, and an electrode section were manufactured and installed, with the help of which it became possible to study the formation of monolayers and LB films under the action of an electric field.

Figure 2. Process unit (a) before, (b) after modernization.

The process of formation and properties of two-component monolayers of metal (iron) phthalocyanine and metal nanoparticles (cobalt) formed in separate technological cycles, graphene oxide, fullerenes, and molecular oragnometallic clusters were studied. The influence of light of different wavelengths on the electrophysical properties of the obtained LB films was studied.

Samples of tin dioxide films were created and methods for modifying their structure and composition were developed in order to achieve greater selectivity with respect to the target gases. In particular, the influence of the technological parameters of the spraying process on the grain size of the film was studied and their optimal ratio was revealed. Figure 3 shows a micrograph obtained using a scanning electron microscope. 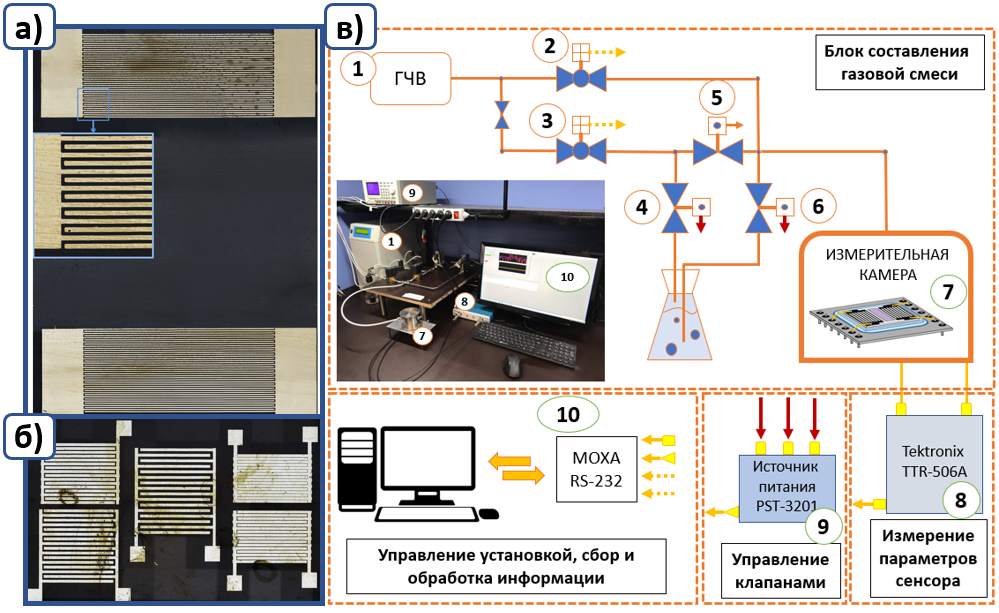 The goals and objectives of the project have been completed in full.

Participation in conferences as part of the work on the project for the reporting period: