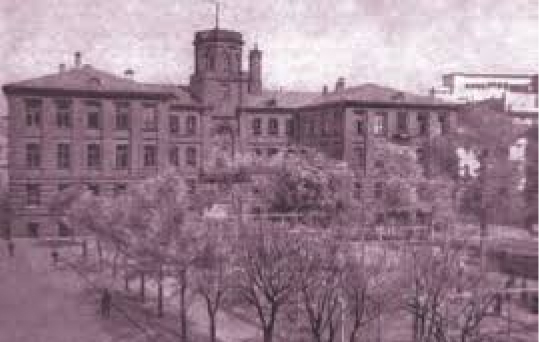 It was created in 1953 on the initiative of the Deputy Minister of Defense of the USSR for Radio Armament, Engineer-Admiral Axel Ivanovich Berg to solve pressing issues of radio electronics, including a defense one. It is located in the former building of the Physics Department of the Moscow State University named after M.V. Lomonosov on Mokhovaya Street near the Kremlin.

In September 1953, the corresponding decree of the Presidium of the USSR Academy of Sciences was issued, and Axel Ivanovich was appointed “director-organizer” of the new academic institution.

In 1955, a branch of the IRE RAS was established in the city of Fryazino, Moscow region, and then in 1979 and in 1990, branches of the IRE RAS were created in Saratov and Ulyanovsk.

Academician V.A. Kotelnikov is the founder of the theory of potential noise immunity. The sampling theorem (Kotelnikov’s theorem) has received worldwide fame and widespread use. He developed the basics and created telemetry equipment for aircraft and rockets, as well as radar for the planets of the solar system. He played an important role in the development of Russian science as director of the Institute of Radio Engineering and Electronics of the Russian Academy of Sciences and Vice President of the Russian Academy of Sciences.

Currently, the main task of the IRE them. VA Kotelnikov RAS are fundamental research in such areas as radiophysics, radio engineering, physical and quantum electronics, informatics, photonics and radiophotonics, acoustoelectronics, nanoelectronics, new materials.

To develop and study the properties of new “smart” materials, as well as to study the issues of their application in devices of various functionality, based on advances in nanotechnology and acoustoelectronics, employees of the Laboratory of acoustoelectronic processes in solid structures (Lab.173) and the Laboratory of Physical Properties of Nanocomposite Materials for Information Technologies (lab. 193) created an interdisciplinary group “Smart materials and sensors”.

Within the framework of this direction, work is being carried out related to the development, creation and research of new composite materials with controlled parameters (smart materials) using nanomaterials and nanotechnology. Developments and research in the field of sensor technologies are associated with the creation of new sensitive coatings for sensor devices of various functionality. The use of various technologies – acoustoelectronic, magnetoelectronic, nanoelectronic, optical, conductometric, microfluidic and biotechnologies – makes it possible to develop various hybrid sensor devices based on new principles.

All projects carried out in the Group are interdisciplinary in nature, related to the application of chemical, biological, micro and nanoelectronic and information technologies.

From 5 to 11 September 2021, the 31st International Crimean Conference “Microwave and Telecommunication Technologies” (CriMiCo’2021) will be held. Requirements for materials are presented on the website www.crimico.com. The deadline for submitting the report is 23:55 on May 15.